A long running project in this hotel restaurant highlighted some of the pitfalls of dimming retrofit LEDs.

Morban were asked to replace a failed dimming system and after assessing the installation, selected iLight SCLED1205 source controllers for the job. A 3rd party also then retro-fitted all of the previously halogen candles and low voltage down lights with LED lamps. Great energy saving across this large scale installation (~50 circuits) and easily within the load capacity of the dimming system…

However, the quality of LED lamps varies widely! Morban found that the models used were introducing so much noise and significant current spikes during switching that, even on small loads, they were causing dimming channel failure! Take a look at the graph below showing a trace of the current draw from just one of these lamps, spikes of nearly 0.5A.

To solve this problem Morban advised the hotel on better lamps to fit (particularly replacing LV dimmable LED with mains voltage versions) & overhauled the installation to include a larger iLight SCA1210S dimmer to cope with the heavier loads.

A lesson here in the importance of matching dimmers to the full characteristics of the load, even light loads such as LEDs. We can also not emphasize enough the value in selecting high quality LED products. 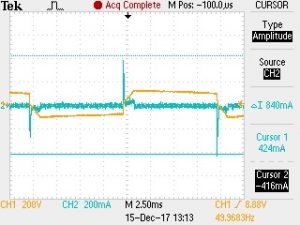 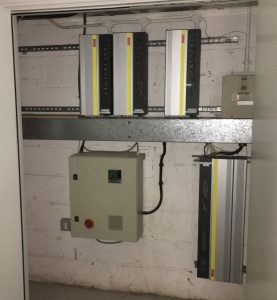